Why celebrate Pi Day with Pie?

π also known as Pi,  has been known for thousands of years. 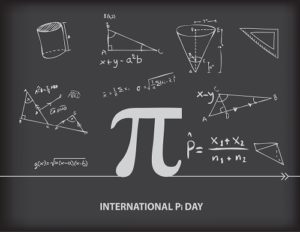 Pi Day? No one really knows who first discovered the ratio, but according to several sources, including Whodiscoveredit, Archimedes and other mathematicians contributed to our understanding of the relationship.

Pi , usually simplified to 3.14 or 22/7, represents a ratio of the circumference of a circle to the diameter of that same circle. (π = c/d)  It is a mathematical constant; that is, the ratio is always the same, regardless of the size of the circle. However, it is also infinite decimal (the fraction 22/7 is only an approximate) and as such is only an approximation.

Most people know math formulas use π  to find values such as the circumference of a circle (πd) or the area of a circle (πr²). Students often wonder if they will ever use this number beyond the classroom. Indeed, adults often use it in daily life, including in construction, medical procedures, and air travel, as explained in universetoday.

Further, planning space for a round swimming pool or a dining room table might involve the use of Pi. Even bakers find need for the calculations that involve this irrational number.

What is an irrational number?

Ok, But what about Pie? 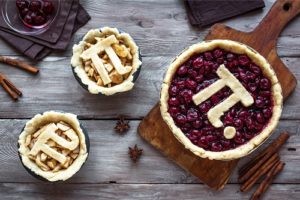 Most of the pies we enjoy as food are round, so there is that relationship.

But really, it’s mostly a play on words (Pie for pi day π)

So let’s talk a bit about Pie- that delicious food that might appear as a scrumptious dinner entrée or a mouth-watering dessert pie. When did pie appear in our culture? Why wrap such wonderful flavors inside a crust and bake? And should you consider a pie for pi day this year?

According to the American Pie Council, pies have been around throughout much of our written history. Ancient Egyptians enjoyed them, although it’s probable that the first pies were merely fillings served on reeds. The reeds provided a dish of sorts, and most likely the diner discarded the reed rather than eating it with the contents.

Colonists brought their food ideas with them to the new country and this included the flour-based pie. The traditional English meat pie provided an easy casing for eating, but more importantly, it helped keep food fresh for a longer time, as discussed in this article in Time.

Although early Egyptians enjoyed meat pie for dinner and dessert, the now popular fruit and cream pies that we associate with dessert came into existence in more recent times. Since their creation, these coveted desserts have seen many changes. Some recipes now replace the flour crust with crackers or even seeds and nuts. In fact, crustless pies often appear as favorite choices.

Single-crust, double-crust, decorative, crustless– each of these calls out to a host of admirers. While we often associate the casual diner restaurant with dessert pie, upscale restaurants showcase them as classy fare. Served as a simple or dressed-up dessert, the pie entices even the fussiest palate.

And let’s not forget the traditional holiday dessert pie. What would Thanksgiving be without pumpkin, apple, and pecan pie? Christmas cookies are a favorite treat, but most of us also cherish dessert pie after our family holiday dinner.

With so many choices, it’s hard to imagine anyone getting through March 14, without a dessert pie or another pie for pi day celebration!

We invite you to try one of the dinner pies or dessert pie for pie day on 3.14. We’ve linked a few of our favorites below. We’d love to hear which recipes you try and how you celebrate pi day this year!

You might also enjoy reading about All American Favorite Cuisine