Many experts worldwide encourage a vegan diet for longevity.  Americans and people from around the world strive to find the best diet. We want a diet that promotes our good health, agility, and longevity; as well as making us look and feel younger than our age. Research and studies continue to unlock the secrets of longevity and unfold findings as to the type of lifestyle to adopt in order to live long.  Diet shines as the most common ingredient amount most studies. Dietary choices that include a vegan or near vegan diet claim the strongest advantage toward a long and healthy life. What is Vegan Diet?

A vegan diet is simply a plant-based diet. It is a diet that is based on vegetables, fruits, legumes (such as beans and lentils), whole grains, seeds, nuts, and avocado. A plant-based diet does not include eggs, meat, and dairy. The value of this type of diet is not limited to healthy living and longevity but also brings about a healthy planet and the protection of animals.

It has been found that a plant-based diet that is rich in fruits, vegetables, nuts, seed, and legumes extends the life of an element (cell organelle) called telomere which is attached to our cell chromosomes. These telomeres have the ability to prevent the fraying and alteration of the genetic codes that are present in our chromosomes. This is of utmost importance because this genetic material in our cells shortens with age as it enhances the aging process. However, living on a healthy plant-based diet will slow down shortening process of these genetic materials and thereby slow down the aging process.

Studies on Vegan Diet for Longevity

A number of studies have been conducted which indicated that a vegetarian reigns as superior to a non-vegetarian one. One of such studies, conducted on 73,000 people, was published in the June 3 edition of the Journal of the American Medical Association (JAMA).  The study compared the longevity of meat eaters to that of the four types of vegetarians earlier mentioned. The result showed that pesco-vegetarians live longest, followed by the vegans. Next in longevity came the lacto-ovo-vegetarians while the semi-vegetarians come last, according to the study. All the participants happen to be members of the Seventh-Day Adventist church. On the average, the vegetarian groups showed a 12% lower risk of dying over the study period when compared to the meat eaters.

These results are supported by previous studies which have revealed that vegetarian diets are associated with decreased risk of numerous chronic diseases like hypertension, obesity, Type 2 diabetes, metabolic syndrome and circulatory disease.

Seventh-Day Adventists have been known with their peculiar lifestyle.

The SDA lifestyle encourages plant- based diet, exercises and forbids the use of tobacco. An earlier study has revealed that Seventh-Day Adventists in California live, on the average, four to seven years longer than other Californians as a result of their typical lifestyle.

However, researchers could not discern between associations, and cause-and-effect links. The question arises as to whether the healthier outcome is as a result of the absence of meat, or the presence of a health-conscious attitude shared by many vegetarians. Most professionals believe both the vegan food choices and lifestyle choices both contribute to overall health.

Researchers at Harvard believe that the Mediterranean Diet is the best diet for longevity. The diet promotes consumption of whole grains, vegetable, fruits, healthy fats from olives and olive oil, seeds, nuts as well as very minimal consumption of wild-caught fish, grass-fed yogurt and cheese. This diet, popular in Greece and Southern Italy where the animals are fed on natural food, differs from the average in the U.S. However, the Mediterranean Diet might best be consumed as vegan. Avoiding any form of animal products offers additional benefits. Many researchers believe that the effectiveness of the food lies in the high amount of plant-based foods consumed rather than the animal products component.

The Blue Zones Studies Showcase a Vegan Diet for Longevity

The Blue Zone island of Ikaria, Greece adopts a different version of the Mediterranean Diet. They lay emphasis on beans , vegetables, fruits, olive oil, small amounts of dairy and meat products, and moderate alcohol consumption.  The Blue Zones actually consist of five regions in Latin America, Asia, Europe and the U.S. which have been identified as having the highest concentrations of centenarians in the world by researchers. Specific regions include: Okinawa, Japan; Ogliastra Region, Sardinia; Ikaria, Greece; Loma Linda, California; and Nicoya Peninsula, Costa Rica. In addition, these communities also have to be largely free of afflictions like cancer, heart disease, diabetes and obesity, in order to qualify as a Blue Zone.

Do you want to live up to 100 years? Study says you should eat plant-based foods and take it easy with meat. Let us consider certain facts about some members of the Blue Zone that set them apart in terms of longevity, from other people in other parts of their nation or the world at large.

The resultant effect of this? Loma Linda residents enjoy the lowest rate of hypertension, diabetes and obesity in the U.S. Incredibly, they live longer by a decade, than the rest of U.S.A. Clearly, this community shows the amazing benefits of a vegan diet for longevity. In addition to  sweet potatoes, grains and beans constitute 23% and 16% respectively of their diet. Less than 15% of their meal emanate from meat, fish and egg.  Animal products originally provided less than 2% prior to the introduction of Western lifestyle into the community after the 2nd World War. This increase resulted in the doubling of the rate of breast, lung and colon cancer in the community. While other factors may contribute, diet clearly strongly affects health.

In this community, 47% of their diets consist of whole grains like barley, oats and brown rice. Barley provides a rich source of manganese. This element helps guard against and treat depression and anxiety. Manganese also promotes skin integrity and bone production. Also, it helps control blood sugar levels. Furthermore, it is an antioxidant that protects against free radical damage. Manganese also protects against aging, asthma, cancer and atherosclerosis, and lowers blood cholesterol. Sardinians consume beans and  peas frequently. However, fish, meat and poultry constitutes only less than 5% of their diet.

The China Study, a Surprise for a Vegan Diet for Longevity The China Study compared the different diets and living styles across different regions of China. It then drew a relationship between diet and disease. The authors concluded that eating animal protein leads to the high rates of heart disease, cancer, and many other Western world afflictions. They provided evidence to show that dairy is as bad, and in some cases worse than meat. They therefore advocate a vegan diet.

The China study concluded that a vegan diet provided the best health benefits overall. However, they did not set out to prove that. In fact, the findings surprised the researchers, one of whom was raised on a dairy farm.

Dr Fuhrman Studies connected  greater intake of colorful fruits and vegetables to longer life. The studies reported that a carotenoid-rich diet will result in the likelihood of longer telomeres (DNA sequences at the end of chromosomes). Carotenoids are a group of pigments responsible for the rich color in many fruits and vegetables.

The length of telomeres also associates with aging. The shorter the telomere length, the faster the aging of the cells. A number of studies have revealed a healthy lifestyle and diet as directly connected to longer telomeres. Data analyzed from 3660 U.S. adults in one study showed significant results. The groups of serum carotenoids and leukocyte with the highest alpha-carotene, beta-carotene and beta-cryptoxanthin levels showed a  5-8% longer telomeres than the rest of the group with lower level of each carotenoid.1

As each cell of the body divides, the length of the telomere shortens. This  ultimately leads to a state of senescence, where the cell is no longer able to divide. The enzyme telomerase aids in slowing the aging process by regenerating telomeres.  Additionally, studies show that  lifestyle and environmental factors affect the activity of the enzyme telomerase.         ,

Researchers are of the opinion that the protection of telomeric DNA from oxidative damage is enhanced by higher carotenoid levels and this leads to protection against aging and chronic diseases.

High levels of carotenoids such as lycopene, alpha-carotene, and beta-carotene in the blood, have  been associated with longer life.2 The following examples  of carotenoid-rich foods reveals how a healthful diet is indicated by circulating carotenoids: All these are colorful, telomere-lengthening foods that are good for your body; you can indulge yourself in them.

Dr. McDougall promotes a starch based vegan diet for longevity and health. A February 2014 McDougall Newsletter (Volume 13, Issue 2) reported that there is a strong evidence that a plant-based diet reduces the risk of premature death from chronic and degenerated diseases. This includes those that are rich in whole grains and legumes. Studies indicate the McDougall diet may reveal the secret of longevity of some plant-based communities. 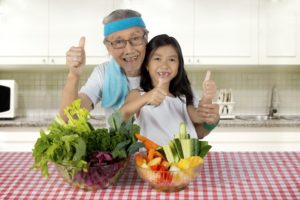 Evidence abounds regarding the hazardous effects of diets rich in animal foods. Additionally, studies strongly indicate the beneficial effect of plant-based diets in promoting longevity. However, replacing animal foods should include minimally refined plant foods for the achievement of maximum benefits. This may partly explain why the benefits of a vegetarian diet appear more profound in the Seventh-day Adventist community than in other populations.

However, living longer but not healthier offers little to our lives. You might enjoy reading these other articles on promoting overall health as you pursue a vegan diet for longevity:

This website uses cookies to improve your experience while you navigate through the website. Out of these, the cookies that are categorized as necessary are stored on your browser as they are essential for the working of basic functionalities of the website. We also use third-party cookies that help us analyze and understand how you use this website. These cookies will be stored in your browser only with your consent. You also have the option to opt-out of these cookies. But opting out of some of these cookies may affect your browsing experience.
Necessary Always Enabled

Any cookies that may not be particularly necessary for the website to function and is used specifically to collect user personal data via analytics, ads, other embedded contents are termed as non-necessary cookies. It is mandatory to procure user consent prior to running these cookies on your website.